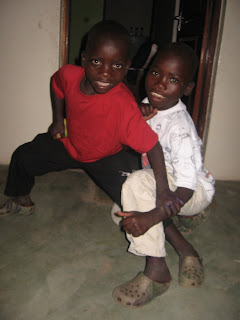 zacarius and casper, the 2 boys we brought back from street ministry, playing at my house.
every tuesday and wednesday we have street ministry.  tonight was the first time i've gone and i loved it so much!!!!  i was so in my element surround by over 50 boys ages 6-18 that live on the streets of maputo.  i was overwhelmed by the heart of the Father for these boys who have nothing.  most of them were dressed in clothes full of holes and were covered with sores.  yet they cried out to the Father with such passion. . . perhaps because they are so desperate for the love and provision of the Father.
i have 2 amazing stories from the night:
story #1
a couple of weeks ago, selso, one of our 11 year old boys ran away from the center.  he had been living on the streets before he came to iris so we knew that was where he had gone.  the missionary over the dorm he lived in was desperate to see him return.  as we prepared to head to the city tonight, i reminded the mozambican pastor, nico, and the youth from the center that were going with us to keep an eye out for selso.  and i prayed a lot that God would let us find him tonight.  as we were driving through the city one of the girls with us saw selso walking down the street near kfc!!!  so we stopped the car and pastor nico and one of the youth got out to go talk to selso.  however, when selso saw them, he took off running.  they ran after him for a while but were not able to find him.  the missionary from his dorm happened to be in the city so i called her and she decided to stay at kfc in case he returned.  and sure enough, he did!!!!  she was able to sit and talk to him for a while but he just did not want to return to the center.  pastor nico went back to kfc and was able to convince selso to get in the car with us.  it was amazing to see the Lord answer our prayers by leading us to selso.  please continue to pray for him.  i don't understand why he would choose to live on the street rather than at the center but for some reason that is a battle for him.  i know that we can't force him to stay here but i also know that he is so much better off here.  so please pray that he wouldn't run away again and that what ever problems he was having here would be worked out.
story #2
right as we began the preaching at church with the street kids, 2 little boys came in.  they were dirtier than most and neither had on pants . . . only ragged shirts and underwear.  the smallest one, casper, came and sat with me and his brother, zacarius, sat with brooke, another missionary.  after the service, we got pastor nico to come talk to the boys and find out their story.  their mom lives in a village about 20 minutes from the city.  she had recently remarried and the new husband didn't want the boys so they were thrown out.  sadly, that happens quite often here.  so we brought the boys back to the center with us!  brooke and i gave them a shower, dressed them in clean clothes (they were so excited about the camouflage croc-like shoes!), and fed them some fruit and yogurt.  afterwards we took them up to the dorm that i am helping out with where they are spending the night.  at first they were rather shy but not 2 minutes after we left them, they came running back outside and headed to the playground where they joyfully ran around for another 30 minutes before going to bed.  pastor nico will come back and get them in the morning and take them to find their mom.  if she refuses to take them back, they will be brought back to the center.  i believe that the Father knows what is best for the boys and whether they should stay here with us or return to their family.  please pray for His will to be done.
this is what the Kingdom is about. . . caring for the least of these!
"let the little children come to Me for the kingdom of heaven belongs to such as these."
matthew 19:14
Posted by Sarah Olds at 11:13 PM 4 comments:

i went to visit another ministry in maputo yesterday. its called project purpose and is run by a woman named katie. she's been here in maputo for 7 or 8 years. her ministry's focus is on girls in the sex industry.  she leases the top floor/the roof of a building in the city right across the street from central market (its an incredible location with a great view of the city). the building is in the red light district on a street called "good death" (but the Lord has promised her it would become "abundant life"!!!). her heart is to provide a safe place for the girls to heal and grow holistically. she has over 50 girls that she's connected with ranging in age from 12-24. here are the things going on with project purpose:
* discipleship - walking through the healing process with the girls
* a sewing room where the girls learn to sew and then make clothing to be sold in a shop there at the center.
*  a room that will be made into a salon and a beauty program to teach them so that they can work in the salon.
* a preschool for the children of the girls.
* a kitchen where meals are prepared for the girls during the day and where they are taught culinary skills
katie would love to see 24/7 prayer happening at the center/on the roof one day - just waiting for the Lord to send someone with that vision to oversee itl!!!!
she also has land in matola (a village about 15-20 minutes from the building in the city) where she is in the process of building a center for the girls to live at with their children.  currently, they have only built one hut and there is a woman with 5 children living there.  the vision is to build cement homes to house 40-60 women/children.  they have planted many crops on the property and they eat the food they grow.  the kids go to school in the village.
it's so incredible to see how the Lord is lavishing His love all over this city!!! He's desperate for His mozambican bride!!!!
Posted by Sarah Olds at 11:01 PM No comments:

Stopping For The One

"Love the one in front of you and God will multiply that love."
-Heidi Baker 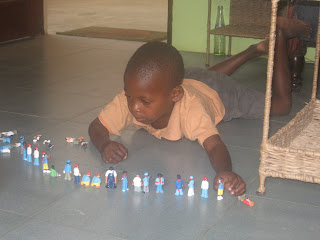 .
My prayer each day here in Mozambique is that the Lord will show me one person that i am to stop for. . . one child that I am to intentionally love.  Can you imagine how powerful it would be if all of us lived that way?  If all of us began each day asking the Lord to show us one person we could love at our school or at our work or at the grocery store?  The love of the Father would multiply so rapidly!!!!
Heidi Baker, the founder of Iris Ministries, has built this ministry upon the principal of stopping for the one in front you.  Today there are thousands and thousands of children cared for all over Mozambique and other African nations.  Its not just the missionaries caring for the children either. Mozambican pastors are taking in orphans and caring for them because they've seen the power of love!  It's an incredible thing!!!
Posted by Sarah Olds at 5:57 PM 4 comments: 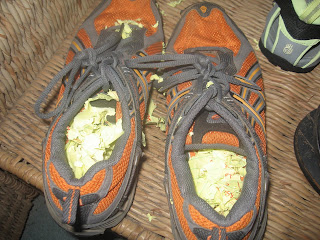 If you take a good look at this picture, you'll see shredded notebook paper in my tennis shoes.  This is where my new roommate hoped to reside.....a mouse!!!!  But upon discovery of his new home, i quickly evicted him and took back possession of my shoes!!!!  Sadly, he also found my reese's pieces that my friend deanna gave me before i left the states.  i think he only ate one though and you better believe i'll still be eating the rest of them....can't buy reese's here!!!!!
Posted by Sarah Olds at 10:32 PM 3 comments:

So much has changed in my life is 2007.  I left the ministry I had worked at for 6 years, spent 3 months at a missions school, sold most of my belongings, said goodbye to my family and friends and moved to Africa.  Now here i am . . . excited about what the Lord has in store for 2008!!!!
Recently I have been reading Isaiah 49 over and over:
"Before I was born the LORD called me; from my birth he has made mention of my name. He made my mouth like a sharpened sword, in the shadow of his hand he hid me; he made me into a polished arrow and concealed me in his quiver. He said to me, "You are my servant in whom I will display my splendor." Isaiah 49:1-3
Isn't it amazing to think about the details that Lord puts into every moment of every day of your life?!?!  All throughout 2007 and the years before that, He was making me ready so that He might display His splendor through  me here in Mozambique.   Before I was born He called me to the children of Africa!!!  What a faithful God we serve!!!!
I hope each and every one of y'all have an amazing 2008 filled with the blessings of the Lord!!!!
Here are some pictures from the new years festivities with the kids: 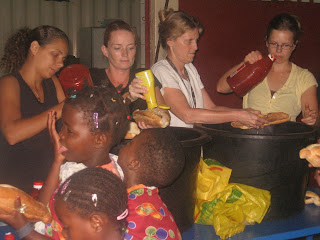 The missionaries and visitors served the kids hotdogs on New Year's Eve. 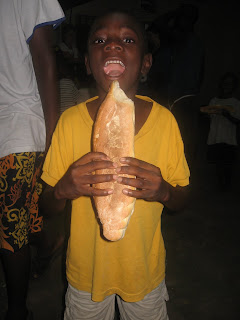 The hotdogs were almost as big as some of the kids!!!! 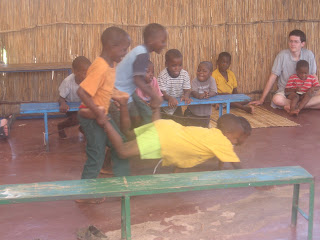 On New Year's Day, I helped with a party for the little boys dorm.  The party started with wheelbarrow races, which they had never done before.  They were so cute as they drug their partners across the floor to win!!! 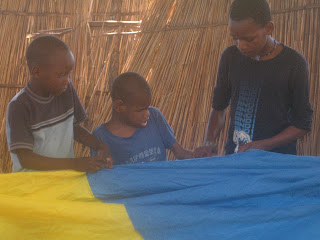 Next we brought out the parachute for the boys to play with.  Domingos, the boy in the middle, is blind.  The other boys really look out for him though! 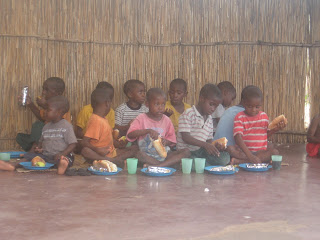 Here are the littlest boys in the dorm enjoying their hot dogs, yogurt, apples, cookies, and coke! 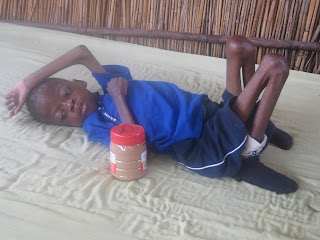 At the end of the party, all of the boys got their own jar of peanut butter which is a very special treat.  This is Thabo.  He has been living at the center since May of 2007.  He has been very sick for the last few months.  Please pray for his healing!
Posted by Sarah Olds at 5:19 PM 3 comments: