Not even 2 weeks after I wrote the blog about Selso and the transformation I've seen in him the past month or so, he has run away again.  He left last Saturday and has not retuned yet.  Again, I just don't understand what it is about life on the streets that draws him away.  Please pray for him.  Pray that the Father would watch over him and keep him safe -- the streets are so dangerous and he is so young.  Please pray that he would willingly come back to the center and that he would know that he is loved and cared for in this place.
Posted by Sarah Olds at 10:22 PM 2 comments:

Pray for our Babies!

Niamias
We have had a lot of sickness here at the center this week and your prayers are needed! Our baby house has been hit the hardest.  Last night a little baby named Irene died.  She had malaria and was being treated but it worsened very quickly.  Tracie, the director of the baby house and Jannie, the nurse over the baby house, were rushing her to the hospital but she died on the way.  Today, that same nurse has had to take another baby, Niamias, to the hospital.  He has also been battling malaria and is not doing well.  On top of the malaria, a large number of the babies have had diarrhea for the last few days and they can not figure out the cause.  They decided this morning to shut the doors to the baby house this morning for 48 hours to limit the number of people coming in and out until the babies are healthy again.

Please pray for the health of our babies and for the missionaries (Tracie, Neil and Hilda), nurses (Jannie) and Mozambican workers who are pouring themselves into these babies right now.  Pray specifically for Niamias who is battling malaria.

Thank you!
update:  Neimias was treated for dehydration and sent back to the center.  This morning (Saturday), his temperature rose to 106 degrees and his breathing slowed to the point that oxygen was required.  He was rushed back to the hospital and is in icu.
monday update:  Neimias has gotten worse.  He is now in a coma and in the highest priority icu.  Please continue to cover him in prayer!!!!  There are still 5 or 6 other babies that are sick.  Tomorrow morning, they will be isolated in the clinic until all symptoms are gone.  2 more babies were diagnosed with malaria today.  Keep praying for all of the babies!!!!
friday update:  Today Neimias was moved to a normal room in the hospital!  He has come out of the coma and is even able to drink milk without a feeding tube!!!!  Please keep praying...we want to see COMPLETE RESTORATION of his little body!!!!!  Please also pray for Thabo, who I've written about before.  He has fluid around his heart and is in a great deal of pain.
Posted by Sarah Olds at 12:05 PM 4 comments: 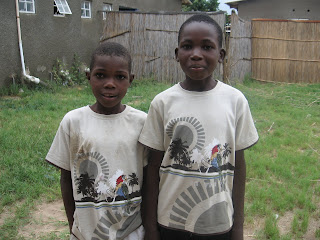 This past Wednesday we welcomed 2 new boys into my dorm!  There names are Alberto and Enrique.  They are 12 and 10.  Their mom passed away back in December or January and they were living in the house alone with neighbors giving them food.  Somehow the social agency became aware of them and brought the boys to us.  They have different fathers.  We've been in touch with Alberto's father and he wants nothing to do with his son.  We've yet to locate Enrique's father.  Neighbors told us there was an older sister who was married but no one knows where she lives.
The boys  were so excited this past Thursday as i let them go through our dorm clothes boxes and pick out some shorts and tee shirts.  On Friday I took them to our clinic and had them all checked out and started on vitamins and iron tablets.
Sadly, we hear stories like that of these boys all the time.  Sometimes I find myself not even thinking twice about them.  But then yesterday, I seemed to hear heartbreaking story after heartbreaking story and became a little overwhelmed by how hard life is for the people of Mozambique.  2 new boys whose mother passed away and the fathers don't want them, a 17 year old girl at the garbage dump grieving the loss of her baby, another woman at the dump worried about the health of her infant after having her 10 month old die of malnutrition last year, another children's center down the road where children are not well cared for yet social agencies continue to give them more children . . . the stories are never ending.  I pray my heart never becomes numb to the stories of these people because I know they break the heart of our Father.
And somehow I know that their is hope for these people . . . that our Father will bring redemption to this nation.  Seeing the joy on the faces of Alberto and Enrique reminds me of that.
Posted by Sarah Olds at 1:47 PM 1 comment: 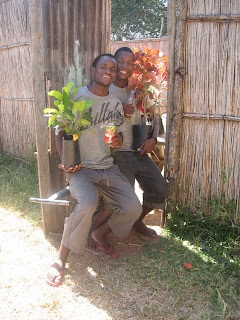 Outside of my house I have this great yard for my boys to play in.  Since I arrived in December I’ve wanted to plant new trees and shrubbery and really make it a beautiful place.  That has finally begun to happen!!!  Nelson and Manuel are two of the older youth who live here at the center and I pay them $8 each a month to work in my garden.  They have really taken ownership over the garden and are so excited about seeing it improve.  Manuel has all these ideas about putting plants everywhere and I have to continually remind him that the younger boys will trample all over them!!!  But it’s so wonderful to see them taking care of the things entrusted to them.

Isaiah 35 has always been one of my favorite chapters in the Bible and even more so here in Africa where it is so hot and the ground is so dry.  “The desert and parched land will be glad; the wilderness will rejoice and blossom.  Like the crocus it will burst into bloom; it will rejoice greatly and shout for joy . . . water will gush forth in the wilderness and streams in the desert.  The burning sand will become a pool, the thirsty ground bubbling springs.  In the haunts where jackals once lay, grass and reeds and papyrus will grow . . . They will enter Zion with singing, everlasting joy will crown their heads.  Gladness and joy will overtake them, and sorrow and sighing will flee away!”

I believe that the things happening around us in the physical world are a sign of things going on in the Spirit. Replacing the dry dead ground with plants and grass and encouraging Manuel and Nelson in caring for them, is my little way of declaring that sorrow and sighing will flee from the fatherless children here at the center and that gladness and joy will overtake them!!!! 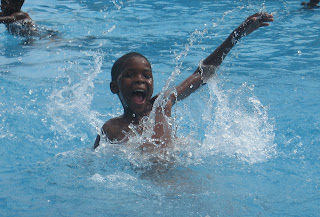 For in you the fatherless find compassion.  “I will heal their waywardness and love them freely.”      Hosea 14:3-4

Back in January, I wrote a blog about a young boy named Selso who had run away from the center.  We had found him in the city during street ministry and brought him back to the center against his will.  Just wanted to give a quick update on him.

Selso has since moved into my dorm and is doing great!  He is one of the sweetest boys!!  I took him and some other boys to the pool recently.  It was incredible to watch him playing and to see so much joy on his face!  I was flooded with memories of the night we brought him back from the street literally kicking and screaming.  I can’t fathom why one of our kids would choose to leave the center.  Here they have a bed to sleep in at night, 3 meals a day, school, and a huge family made up of other kids, Mozambican men and women, and missionaries.  What does the street have to offer?  A dark ally to sleep in?  Begging for scraps of food?  Selso was not meant to live like that!  No one is!

Sounds familiar doesn’t it?  A perfect picture of the prodigal son.

So many of us choose to live apart from our Father because we think the world has more to offer.  Eventually we end up disappointed because the love we search for in the world isn’t good enough.  Although God would never force us back kicking and screaming, He is there ready to heal our waywardness and love us freely!!!

Posted by Sarah Olds at 5:21 PM No comments: 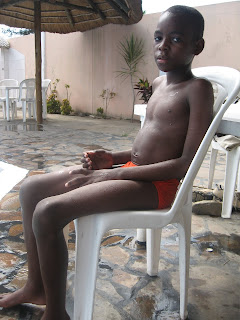 Agustino is one of the HIV+ boys who lives in my dorm.  A few weeks ago, he came down with a severe case of malaria and was hospitalized for almost a week.  Because of the HIV his body just can’t fight off sickness like the other kids.  He still has not completely recovered.  Most days, he shows up at my house after lunch looking pretty down and sits in my house or follows me around the rest of the day.  He has lost quite a bit of weight and is very weak.  He even struggles to walk sometimes having to hold onto walls as he goes.  The nurses at the center and the doctors at GATV (a free AIDS clinic in the city that our HIV+ kids go to each month) are concerned his battle with malaria may have sped up the progress of AIDS in his body.

I have begun preparing meat for him every evening and giving it to him to add to his rice and vegetables in an attempt to increase his protein intake and build back up his strength.  I am claiming the promise of God found in Isaiah 40:29 that He will give strength to the weary and increase the power of the weak.  Please join with me in praying for Augustino’s complete restoration!