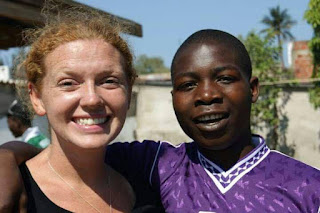 I met Zelfo in 2009 when I first started working with Masana.  He was one of the hardest boys to love...a bully to all the younger boys on the street.  I remember fiercely defending the little boys when Zelfo would take their food or force them to give a portion of the money they made begging on the streets.  He was well known by everyone who lived on the street.  We took him home two or three times but he always came back to the streets.  We even paid for him to go to South Africa where his brother lives, but still he ended up back on the street.  Over the years he softened up a bit.  He had stopped coming to Masana because of his age but he'd visit us from time to time.  He always knew he was welcome here if he was sick or injured.


A few weeks ago he showed up because he needed us.  He has been badly burned while trying to remove some electrical wires in an abandoned building.  Someone had taken him to the hospital but he ran away.  He showed up here with a barely recognizable face and wearing hospital clothes.  After chatting for a bit, Roberto and I convinced him to go back to the hospital with the promise that we would visit daily.  He accepted but only stayed 2 more days before running away again.

Fast-forward to last Friday.  One of our regular boys showed up at the gate and asked me to come outside and speak with him.  He had bad news.  Zelfo had passed away during the night.  Roberto and I quickly got in the car and went to the area of the city where he had been staying but the police had already removed his body.  So we went to the morgue at the Central Hospital where the police agent had us identify his body.  He needed Zelfo's personal data to put on the hospital intake form.  I was stumped.  I knew that Zelfo was he "street name" not his real name but I couldn't remember his real name.  So the agent had to list him as "unknown."  We headed back to Masana and I searched through our notebooks where boys' stories are recoded.  Jose Lino.  23 years old.  From Xai-Xai.

We tracked down Zelfo's family and 3 of them arrived at Masana on Sunday from up north.  That night we had a memorial service for all of the street boys to come together and honor the life of Zelfo.  80 people showed up.  Like I said, he was famous on the streets of Maputo.

Monday and Tuesday I spent hours with the family at the hospital trying to get Zelfo's body released for his burial.  We had to go to 3 police stations to find his process so that his name could be changed from "unknown" to "Jose Lino."  When it came time for his family to identify his body, they couldn't do it.  It wasn't because they were nervous about seeing him dead...they literally couldn't identify him because they didn't recognize him.

That was the hardest part about this whole ordeal.

Not spending hours sitting at the morgue with the stench of death all around.

Not walking through the morgue and seeing bodies everywhere....treated with so little respect.

Not treading with caution so that I didn't slip in whatever that gross liquid was on the floor.

Not the shock of them opening the refrigerator and pulling out the drawer with, not 1, but 2 bodies crammed in together.

The hardest part was realizing that Zelfo had spent so much time on the street that his own family didn't even recognize him.  Over half of his life had been spent on the streets.  Masana literally was the closest family he had.

I fought back tears as I stepped in to do the official identification of the body.  Precious Zelfo.  Notorious Zelfo.  His defiant attitude was both annoying and inspiring. He knew who he was and what he wanted. He was strong and was a bully. But he was also a big softy who hated his picture being taken.

To us you were not an "unknown" street boy.  You were Zelfo.  And we loved you.  Thank you for the privilege of caring for you these past 8 years.  You are home now.
Posted by Sarah Olds at 2:29 PM 4 comments: