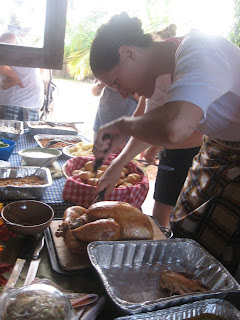 We had a wonderful Thanksgiving here at Zimpeto!  It was lots of fun preparing a real southern thanksgiving dinner for 20 people from all over the world - America, England, New Zealand, Mozambique.  My roommate, Erin, and I prepared for over a month.  We bought ingredients in Mozambique and South Africa and even had things brought over to us from the States.  Brooke, my wonderful friend from New Zealand, got a great introduction to casseroles as she helped me prepare every casserole imaginable!  We had turkey, corn casserole, sweet potato casserole, pineapple casserole, green bean casserole, squash casserole, macaroni and cheese, stuffing, mashed potatoes, carrot cake, peanut butter cake, pumpkin pie, and pecan pie! If it weren't for the over 100 degree temperature I would have thought I was at my mama's house!!! 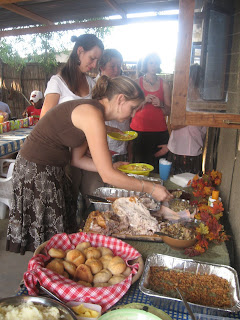 Posted by Sarah Olds at 4:13 PM No comments:

I wanted to update you all on some things the Lord has been doing in me over the last couple of months.  As I reflect back on the past 10 and a half months that I've been here in Mozambique, the moments that I have felt most alive would be when I'm at a Tuesday night church service with the street kids or when I'm out in the city and run into some boys living on the street and just talk to them for 5 minutes or when I go visit Zacarius (a street boy that I've written about on my blog a few times) and his family with Gaspar.  It's in moments like these that I feel an overwhelming since of the Lord's love being lavished through me.  And isn't that why I came to Mozambique?

Over a year ago, as I was praying about coming to Mozambique, I was torn between continuing to minister in the inner city or Africa.  The Lord finally confirmed my decision to move here when He clearly showed that He was calling me to both - Maputo, a large city in Africa.  But the Iris children's center is 30 minutes outside of the city and most of our kids are from villages.  Although I love the boys at the center, I don't feel like I've been walking in all that the Lord has for me.

For the past couple of months, I've been praying about whether or not to return to Iris Ministries for another year.  I felt the Lord directing me to tell the directors of the center that I would not be returning.  My heart is totally for Mozambique and I can't imagine not being here so the idea of telling them that when I had no idea where I would go or what I would do was rather scary.  But the Lord told me to step out and trust Him.  So I did.  And over the past 2 weeks, since I told them I wouldn't return, I have been so amazed at how quickly the Lord has directed my steps!

A friend of mine from New York, Marcella, has been here in Maputo trying to learn about different projects around the city.  2 different people told her about a man names Pastor Paulo who had an incredible project with street kids.  She set up a meeting with him and invited me along.  As he described his project, he said that they have been praying for a missionary to work with them.  At this point, he had no idea that I wanted to work with street kids full time!  I have since visited his church and the project.

Paulo is the pastor of a reformed church in the city.  His church partners with assemblies of God church and a Baptist church to run a project for street kids.  They don't have their own center but meet at the assemblies of God church.  Each day, they open up for up to 30 street kids and provide breakfast, discipleship, life skills (how to wash their clothes, cooking, etc.), basic education (reading/writing), and lunch.  The day wraps up around 1:30 and the kids leave.  This happens Monday - Friday.  Ultimately, the goal is to get to know the kids and their individual stories and help them reunite with their families.  They do home visits and assess the family situation as well as meet with the parents to discuss why the child is living on the streets.  When parents are willing to take them back but need financial help, they help them start their own business.  They also help get the kids enrolled in school and find a church in their community.

The project was started 5 years ago by a German woman named Debra. She moved back to Germany a couple of years ago.  Since then, Pastor Paulo, along with a team of 7  or 8 Mozambican volunteers have been running the program.

Over the past months, as I talked to friends about wanting to work with street kids, the things this project is already doing are exactly what I described to them as my dream.  I am overwhelmed with the faithfulness of God.  His word says, "Delight yourself in the Lord and He will give you the desires of your heart."  And He's doing just that!

I will return to Mozambique in late January and begin working with street kids.  I am still sorting out where I will live when I return. I have a friend named Betsy that lives in the city and works with Samaritan's Purse.  She is committed to her current apartment until April.  Hopefully we will be able to get a place together after that.  That leave 3 months that I need to make other arrangements.  I have a couple of options that I am looking into.  I am also hoping to go to Portugal for 6 weeks in May to attend a language school with my friend Marcella.  I will take some more Portuguese classes here in Maputo in January as well.

I will be arriving in Atlanta on December 4th and look forward to spending time with my family and friends.  Though I won't be in Mozambique for Christmas, I am helping to organize gifts for the 35 boys in my dorm before I leave so if you'd like to make a financial contribution towards that, I'd gladly accept.  You can make checks payable to Unveiled Faces and designate it for Sarah Olds.  Support can be sent to: