The Journey of Masana

Please take a minute to watch this video that beautifully captures the ministry of Masana:

Posted by Sarah Olds at 4:17 PM No comments:

Hope in the Suffering

Life on the streets is full of suffering.  These last few months, we have seen an increased number of boys showing up at our house all hours of the day or night in need of medical attention.  We had little Antonio who was hit by a car and couldn't walk.  There was Marcilino who was hit by a car and broke his arm.  We also had one other boy that was hit by a car and left with a severe sprain.  We've had 4 or 5 boys with urinary tract infections because of drinking contaminated water.  Alex was beaten over the head with a rock and needed stitches.  Antonio was beaten so badly in his face that his eyes were swollen shut for a week and he still doesn't have full vision back.  Another Antonio had a piece of iron go through his foot and developed a horrible infection.  Alfredo was badly burned on his leg when someone threw gas on the fire they were cooking on.  2 boys have tested HIV+.

Most of these health issues are things that would never happen if the boys were living at home with their families and not on the streets.  Boys who run around the streets begging at stop lights, sometimes get hit by cars.  Boys who steal for a living get beaten up when they are caught.  Boys who dig through trash dumpsters without proper shoes, get injured by sharp objects.  Boys who live in an abandoned church with no running water, develop infections from contaminated water.  And maybe one of the harshest realities of street life:  boys who don't practice safe sex in a city where 12% of the population is HIV+, test positive.

But God has placed Masana in the middle of this city to serve as a safe haven for these boys.  When no one else seems to care about them...we care.  When they ring the door bell at 2 o'clock in the morning, we will crawl out of bed to help them.  We will spend hours in hospital waiting rooms making sure they get the medical care they need.  We'll walk to the local pharmacy as often as needed to buy medicine for them.  And through all of the suffering that the boys endure, we will not stop praying that God use it to transform their lives....that this illness or this injury will finally be the tipping point that sends these boys back to their families.  We will find hope in the suffering. 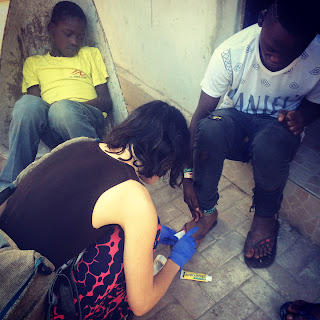 Posted by Sarah Olds at 1:43 PM No comments: