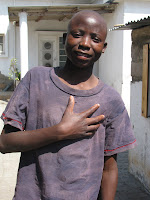 As of this past weekend, he is the 3rd boy we've invited to leave his life on the streets and live with us. Taking in boys to live with us is not our norm as we very much have a heart to see the street boys reconciled to their families. But with Tilfo, Paito, and Felix, the 3 boys living with us, we feel like God has something special in store for them that me and my housemates are to be a part of.

We are not exactly sure how old Tilfo is. He thinks he is around 15. His documents say he is 19. I think 15 or 16 is a more accurate guess. Here in Mozambique, its common that a child will not have official birth documents so years down the road when someone has documents created, a birthdate is created. Both of Tilfo's parents passed away. He spent 7 years living at a children's center where he studied through the 7th grade. Tilfo left the children's center in 2009 and started living with an uncle and aunt. He encountered some problems in their home and decided to leave. That's when he started living on the streets and became a part of Masana.

Tilfo is an amazing young man. He is very gentle and patient. He is quick to help with anything that needs to be done. He's a talented soccer player and does very well in school. We are so excited to have him in our home and a part of our family. In the next few days, we'll arrange for him to study at a school near our house. We'll also be going to visit his aunt and uncle. This will be the first time that Tilfo has spoken to them since he left their home a year ago. Please keep Tilfo in your prayers as he settles in here, begins school, and starts the process of being reconciled with his family.