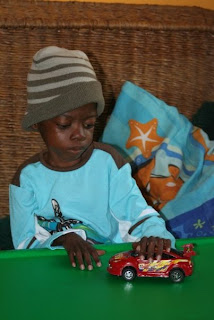 i wanted to let y'all know that thabo passed away today.  he had been really sick the past week or so with multiple trips to the heart specialist.  as hard as it is to lose a little one like him, it's worse to see him suffering.  now we know that he is in the arms of Jesus.  thanks for all of your prayers for him over the last months.
Posted by Sarah Olds at 3:46 PM 2 comments:

My friend Brooke and I have befriended a couple of little boys living on the streets in Maputo - Zacarius and Adilson.  They are both 8 or 9 years old.  You may remember Zacarius from an earlier blog that I posted about him and his brother, Gasper, who we brought to the center from street ministry.  Zacarius was placed back in his father's home while Gasper stayed here at the center.  5 or 6 weeks ago, Zacarius ran away from his father's house and has been living on the streets since.
Brooke and I  look for the boys whenever we were in the city.  Last Tuesday, we took them out to lunch at KFC.  During lunch, the boys told us about their house.  I was really confused because I knew they were staying on the streets and didn't have a house.  After lunch, we drove over to a little park to see their house.  They had taken bricks being used to lay new sidewalk and constructed four walls.  Their floor consisted of cardboard boxes.  At night, they curl up together and sleep.  On Saturdays, there is a big touristy market in this park that we take visitors to.  Yesterday, I was anxious to see how the market affected the boys house.  I thought perhaps it would have been torn down by the police.  But instead, other street kids have joined the boys and they've built a huge house with 4 or 5 room.  They've even found plastic to make a roof!  I would guess there are 12 - 15 kids living in this house.
Every time I see Zacarius in the city, I ask him if he wants me to take him back to his family.  They answer was always no.  But Saturday he finally said yes.  He was ready to go home.  So today Brooke and I along with Ernesto, one of the youth from the center, met Zacarius at his "house" and took him back to his mom.  She lives in Matola, a suburb of Maputo, in a small straw home.  Their village is near the river with a beautiful view of the city.
For now, mother and son are together and I pray he stays there with her.  I don't understand what it is about the city that would lure a boy as little as Zacarius but I pray that he'd be content to simply view the city skyline across the river with his mom rather than run back to the streets.
Posted by Sarah Olds at 9:31 PM 1 comment:

Where Does Time Go? 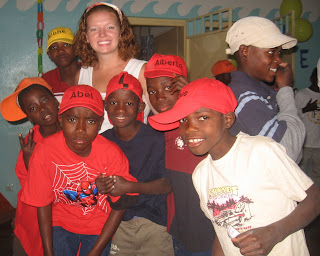 I can't believe it's been over a month since I've written on my blog!  But i guess it's a good picture of how crazy busy the month of May was for me!  First, there was an overload of work while the 4 main missionaries I work with were away.  Then a team came from the UGA Wesley Foundation and I had a wonderful but busy time with them!  It was so much fun having people from home here!  More of you should come!!!!!  I was even able to go on safari with them!
In the midst of the team being here, I had all of my preparations for Children's Day, a big holiday on June 1 similar to Christmas with lots of presents and a big feast.  We had Children's Day with the street kids on Saturday with over 100 showing up.  Then we celebrated here at the center on Sunday with a day packed full of festivities - new clothes give out, church, gifts, and a HUGE feast.  It was a fun but exhausting day!
The Wesley team left on Monday.  I spent all day Tuesday in bed sick ...which was actually a blessing because I desperately needed a day of rest.
And here I am.
Posted by Sarah Olds at 10:39 PM 1 comment: