Over the weekend, I received a phone call from some of the street boys telling me that Zacarius was really sick.  You may remember a post I wrote in March about Zacarius suffering an injury that required the use of a catheter for 3 months.  The doctor had instructed him to return to the hospital every 15 days to change the tube to his catheter.  Zacarius agreed to go back home where the conditions were more sanitary than on the streets and, for the first month, he did well with keeping to his biweekly doctors visit.

But then Zacarius gave into the temptation to return to the streets…as so many boys do after they’ve tasted this life.  And he stopped going to the doctor to have his tube changed.  That brings us to this past weekend when the other street boys called me because Zacarius was really sick because of an infection.

Roberto spent a few hours with Zacarius at the hospital on Tuesday where the doctor very painfully removed the infected tube and put in a new one.  The doctor has decided that he will need surgery to fix the problem in his urethra.  But there are only 2 urologists in Maputo, which means they are very busy and can only schedule Zacarius’ surgery for September.

3 more months with a catheter.

3 more months of fighting the temptation to return to the streets again.

Please join us in praying for Zacarius.  Roberto’s heart broke in the hospital as Zacarius cried out in the midst of all the pain asking God what he had done to deserve this.  May he know God has not caused this suffering but that God desires to use it to draw him into a relationship with Him.  Pray for Zacarius to resist the temptation to return to the streets.  Pray for his relationship with his uncle and aunt, with whom he is living.  Pray for his healing.

Zacarius and his brother were the first street kids I met when I moved to Mozambique.  They continue to have a special place in my heart.  I desperately want to see God transform their lives.  Despite the fact that, after 7 years, they are still on the streets, I know God has not given up on them.  So I won’t either. 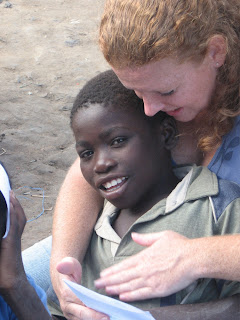 Posted by Sarah Olds at 5:00 PM No comments: