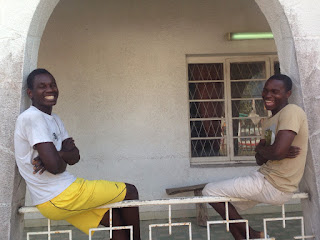 "God makes homes for the homeless"
Psalm 68:8 (The Message Bible)

I shared in "Putting Down Roots - Part 1" that we have purchased land in Mozambique to build a home for our family.  We will not build our house for a couple of years though so we have felt God calling us to make a home for the homeless.  We have chosen 2 boys, Ginito and Nelson, who have both been on and off the streets since I first started working with Masana in 2009.  We have started the process of building a small house on the land where these 2 boys will live and have the opportunity to make a new life for themselves.

Ginito is 18 years old and Nelson is 19.  Neither of them are your typical street boy.  They are both so respectful and hard working.  Thankfully, God has protected them over the years from falling into the temptations of drugs and alcohol.  Ginito is very intelligent and eager to go back to school, which he will in January when the new school year begins.  Nelson is a worker. . . he doesn't do well sitting around and has, over the years, always arranged small jobs like selling bread or working in a shop.  He is now the newest employee at Armadura Gym, the gym that serves as an income generator for Masana.

When we finally do build our home on our property, the boy's house will still exist and we've told them they are welcome as a part of our family until God gives them their own families.  Join us in praying for Ginito and Nelson as they enter into this new season of life.  Pray they will fully embrace the plans and purposes God has for them.
Posted by Sarah Olds at 10:04 AM No comments:

As a family, we have always prayed about the need to put down roots here in Maputo.  Since before we married, Roberto has talked about wanting to buy land and build a home.  I’ve always been hesitant because I like living in the city.  But living in the city means renting which is not something we want to do for the rest of our lives.  So we’ve felt God directing us toward the option of buying land.  For me personally, it is as if He’s reminding me that Mozambique is my home.  He has called me here.  He’s given me family here.  Now He wants me to put down roots.
After prayer, we decided that we would sacrifice our trip to the States this year and use the money we would have spent on plane tickets to buy land.  We have purchased a 40x50 meter plot in an area called Catembe, which is just across the Maputo Bay here in the city.  For now, its only possible to get there via ferry boat but a large suspension bridge has been started and is scheduled to be completed by the end of 2017.  Once the bridge is completed, Catembe will be easily accessible and will, essentially, become a part of the city.

We don't plan on living on our land until the bridge is completed as it costs about $20 to take your car across and back on the ferry.  So that gives us a couple of years to dream and plan for our future home.  But we aren't going to just sit on an empty plot for these next couple of years....stay tuned for "Putting Down Roots - Part 2"