Posted by Sarah Olds at 5:25 AM No comments:

Hello family and friends! How quickly 2010 has gone by! I am back in the states with my family for the holidays and so looking forward to a time of rest before I return to Mozambique for another year.

As I think back over the past year in Mozambique, I am overwhelmed by the goodness of our God. It has been a wonderful year full of blessings in my ministry at Masana with street kids. We helped 15 boys leave the streets and return to their families with 2 others awaiting our help in January when Masana reopens. Our day center moved to a new location with much nicer facilities for the boys. As a result of that, we've seen an increase in the number of street kids wanting to be a part of our project on a daily basis. We now have temporary housing for the boys when they are sick or in the process of being reintegrated with their families. About 25 boys stayed with us for various reasons throughout the year. Currently, 2 boys are living with us as work on helping them reconnect with their families.

We've also seen a few disappointments over the year. We had a couple of hard reintegration attempts where families refused to accept their sons back. One boy we took back to his family returned to the streets 3 days later. 2 others stayed home for a couple of months and then returned to the streets. We had to deal with a few thefts from both street kids and, even harder, friends that we trusted and allowed into our home.

But despite the hard parts of the year, I can say without a doubt that it's all worth it. The privilege of witnessing a family reunited far outweighs any of the disappointments. There is a verse in Psalms that says, "He places the lonely in families." That is what our ministry among these street boys is all about...seeing them restored to their families.

My annual budget is around $24,000. I would like to ask you to pray about supporting me. Whatever God puts on your heart, know that it is being used for the building of His kingdom. I am raising my support through Unveiled Faces, a non-profit organization designed to connect and support missionaries. All gifts are tax deductible. Follow this link to give online or you can mail a check made payable to "Unveiled Faces" with "Sarah Olds" on the memo line to:

If you feel led to support me monthly, let me know and I can send you envelopes for each month or I can give you information on how to set-up automatic debit.

Please feel free to contact me if you want to hear more about Masana and my time in Mozambique!

Our Family is Growing! 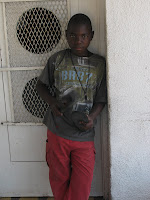 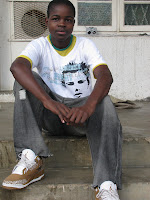 Part of the beauty of working with street kids is how unique each of their stories are. We have boys that have been on the streets for months and some for years. Some love life on the street and have no desire to return home. Some are anxious to return to their families but a little scared about doing it alone. Some try going home and, for whatever reason, just don't stay.
It is our desire to meet these boys where they are and help them reach the place that they are ready to be back home with their families. We've recently had 2 boys move in with us as we've developed a plan to get them back with their families. Let me introduce you to Felix and Paito!
Felix is 12 years old. Masana first reintegrated him in October, 2009. He stayed at home for a few months but then ended up back on the street when his uncle kicked him out. We went and met with grandmother and uncle but they were not willing to take responsability for him because of his behavior problems. They had tried to deal with his problems using witchcraft but without success. Next we went to visit Felix's father. His father loves him but also struggles with Felix's behavior. If Felix were living in america, he would be in a special ed class at school and receive lots of one-on-one attention. Unfortunately the Mozambican schools don't work that way so Felix struggles in school and finds himself getting into trouble often.
Ian, one of my housemates, has been working with Felix a lot this year on learning to read and write. He's progressing greatly!!! A couple of months back, we prayed a lot about Felix and decided to invite him to live with us at the Kunhymela House. The deal we came up with is that Felix will stay with us Sunday - Thursday and then with either his grandmother or father on the weekends. For Felix, we feel his life at home will be much better once he is caught up in school and able to feel successful in his school work. He loves being with his family on the weekends but just isn't ready to be there full-time yet. Felix is a very hard worker and loves helping us out around the house!
Paito is 15 years old. He has been living on the streets since 2008. His mother has always bounced from one man to the next. Paito was never really close to his father. Prior to coming to live on the streets of Maputo, Paito was living with his father and got into some trouble for stealing. One day he just left home and never went back. Earlier this year, we went to visit Paito's father. It was the first time they'd seen each other in 2 years. His father was happy to see him again and wanted him to return home. Paito, however, had no desire to return home. He enjoyed his life on the street...coming to Masana, spending the evening walking around the city, going to sleep, and doing it all over again the next day. He didn't really have friends on the street but kept to himself.
As we got closer to Paito, we realized he needed a little help in seeing the value of family. So we invited him to live with us with the same plan as Felix...that weekends are spent with his father. Our hope with Paito is that he will begin to realize that he needs the support and encouragement of his family if he is going to make something of his life. In January, we will register Paito at a school here in the city. We want to help him find a job and teach him how to budget and save. If time allows, we also want to sign him up for some english courses as he loves learning english.
The Kunhymela House is currently made up of 3 Americans, 1 South African and now 2 Mozambicans. We may not look like a traditional family but as we do life together, its our prayer that these boys will, day by day, see the value of family.
Posted by Sarah Olds at 5:18 PM No comments: