Some days, the boys show up at Masana with the funniest clothes and other treasures they’ve found on the street. Each evening, as venders that sale clothes on the sidewalks are closing up shop, they will give the boys random pieces of clothing that they probably won’t ever sale.

Thursday, it was crazy hat day! Wednesday had been a cold and rainy day so the boys must have worked hard to find warm clothes…including these great hats: 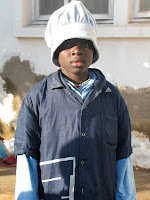 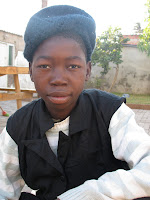 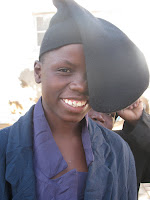 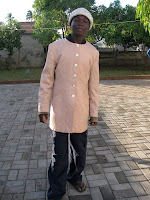 New boy whose name i don't know yet 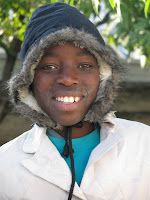 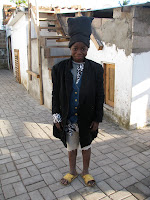 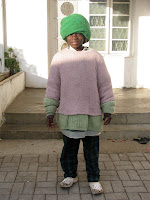 Felix
Posted by Sarah Olds at 11:15 AM No comments:

Shake Off The Dust 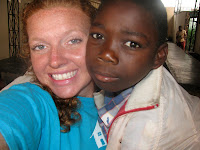 i hate rejection. if satan can keep us in the place of feeling rejected, he knows it will hinder us from receiving the love of God.
rejection is one of the greatest things we are up against as we work with street kids.
i blogged below about the joyful reunion of fabião with his mother. the same day, we also had a very sad home visit where one of the precious little ones dear to my heart, nelson, was rejected by his family. they were tired of dealing with his behavior problems and refused to allow him to return home. they suggested we try to make contact with nelson's father.
this makes me so angry! no child, regardless of what behavior problems he has, should ever have to listen to his family say he's not wanted.
please join with me in praying for nelson. pray that the lies of rejection would be broken off of his tender little heart and that he would know that he is accepted by his Father. pray that he would feel the love of God in a very tangible way and that it would be enough to push away the hurt he experienced saturday as we visited his family.
as we were leaving the family's house, i was reminded of the scripture in matthew 10:14 that says, "if anyone will not welcome you or listen to your words, shake the dust off you feet as you leave that home or town."
i pray little nelson will be able to shake the dust off his feet and follow the path God has set before him...a path that will lead him into the arms of his Father.
Posted by Sarah Olds at 6:12 PM 3 comments:

Saturday we took 12 year old Fabião back home. When we first arrived at the house, none of the family was there. Some neighbors tried to phone them as we waited. Fabião's mother, on her way home from the farm, ran into a neighbor as she headed up the hill towards her house. The neighbor told her she had some visitors...white people. Her first thought was that there was bad news about Fabião. As she arrived at the house, she saw our footprints leading to a neighbor's so she followed them. We were just leaving the neighbor's as she approached.
And what we witnessed next was true joy as mother and son saw each other for the first time in 2 years!!!
It was the most beautiful reintegration I've been a part of!!!
I cried tears of joy as my sweet little Fabião was reunited with his mother. 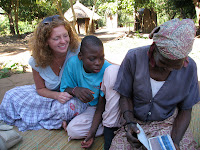 today i had the privilege of entering into the secret world of the street kids i work with. ian, alexis, and i were invited to visit the area of the city where they have construed houses for themselves. i parked my car by a new fancy office building and then we began the uphill climb into one of the few green spaces in the city of Maputo. parts of the hill were so steep that we had to use roots and vines to pull ourselves up. other parts we just had to climb on all fours. we passed a broken pipe peaking out of the ground with water leaking out. the boys informed us that that is where they wash their clothes and bathe when masana is closed. finally we arrived into this little village of houses made of sticks, cardboard boxes, sheets of plastic, and other random scraps found in the garbage.
there are at least 20 boys sleeping in this area. the oldest boys are around 20 years old and the youngest are 11. they are a community...protecting and helping one another. one by one the boys took us to their houses and showed us their individual rooms. some of the boys, especially the younger, sleep 2 or 3 to a house. the older boys had taken much care in building beds with scraps of wood. some had small boxes that served as a bedside table. their little tables were covered with treasures found around the city...almost empty bottles of perfume, broken toys, empty boxes baring the logo of their favorite brands such as nike or coca cola.
i was filled with all sorts of emotions as i spent a couple of hours in this secret world:
PROUD of how resourceful my boys are.
HAPPY to see the older boys inviting the younger boys to live among them.
OVERWHELMED by the care each one took of his home...even running ahead of us to clean up before we arrived.
SAD at the thought of them sleeping on that hill overlooking the city tonight.
BROKEN at the sense of hopelessness that these boys live in when a glorified cardboard box serves as a substitute for a home filled with family.
BLESSED to know that i am trusted enough to be invited into their world.
Posted by Sarah Olds at 11:07 PM 1 comment: