No Record of Wrongs

“Love is not easily angered, it keeps no record of wrongs.” 1 Corinthians 13:5

This week one my boys stole a large amount of money out of my wallet.  It happened while I had my HIV+ boys over for snack.  We were all sitting at the table out in the common area of the building I live in.  One of them asked to use the bathroom in my house.  While in my house, he went into my bedroom and took about 3,000 metaci out of my wallet, which is equivalent to $120.  I didn’t discover that the money was gone until later that night when I went to pay for my dinner at the Chinese restaurant in the city.

I immediately phoned my friend Brooke, another missionary at the center.  I told her the two boys that I suspected.  One of them lives in the dorm that she oversees and the other one in mine.  In the back of my head I totally knew it had to have been the boy from her dorm because I thought for sure I could trust my boys!  After all, these are the boys that I have over to my house for snacks three times a week.  They love to help me bake or to carry my groceries into the house.  These are the boys that I had just taken out to dinner in the city a week ago.  We spend tons of time together.  They would never steal from me.

Brooke confronted both of the boys and they both denied it.  When I returned to the center, I spoke to Manuel, one of the older youth who works in my garden, about the money because he had been working in the garden at the time the money would have been stolen. Manuel immediately knew which of the two boys I suspected had done it because he had seen that boy at a little shop outside the center buying cokes and snacks for his friends in the dorm.  Sure enough it was the one I thought for sure was innocent . . . one of my boys.

Twenty minutes later, Manuel and some of the older youth showed up at my house with the boy.  I opened his school bag and found 2,200 mets ($88).  At first he claimed he didn’t know how the money got there but after a bit of badgering from the older youth he confessed to having stole it.

In the end, this boy was sent home for two weeks as his punishment.  Maybe you’re confused.  If he has a home why is he living at the center?  Because his home consists of a mother dying of AIDS.  Just before he left, I saw him on the playground and his one question was, “Mana Sarah, can I still come to your house when I return in two weeks?”

Love keeps no record of wrongs.

Dinner in the City Every Monday, Wednesday, and Friday I have 7 of the HIV+ boys here at the center over to my house for snacks.  They have become "my boys!"
A couple of weeks ago, after I bought my car, my boys started asking me when they could go somewhere with me . . . and before I knew it they had me roped into taking them all to Memo's, a restaurant in the city they had all heard of but none had ever eaten at.  Ever since I agreed to take them, over a week ago, the excitement of today built!  Over and over again they told me what they were going to order - CHICKEN!  Here at the center, they rarely if ever use forks and knives so they started practicing using them a couple of Mondays ago while eating hard boiled eggs at my house!  Soon word had spread all around the center that I was taking them out and I had tons of boys asking if they could go too!  Even the educator (adult Mozambican who works in my dorm) asked if he could go with us!  I wish I could take them all!!!!
Tonight was the long-awaited for dinner at Memo's.  We had so much fun!  All of the boys ordered half chicken with fries and rice.  They all tried eating with their fork and knives but soon abandoned them for their fingers!  After dinner we went to Jardin de Namorado, a park in the city, for ice cream.
As we left the park and started back to the center, I got pulled over by the police for turning around after missing my turn and realizing I was headed for a deadend.  Police in Mozambique are notorious for bribing drivers.  He claimed I wasn't allowed to turn around there because I was near the president's house.  My fine was 2000 mets which is equal to $80!!!  My friend Vovote was with us so he told the police that one of them could get in the car too and we would go to the police station and pay the fine.  The police immediately said he'd cut it in half and we could just pay him.  At this point I understood enough of his portuguese to know that he was trying to bribe me and told him I was not giving him any money and the he needed to give me a ticket if he wanted me to pay a fine.  To which he responded "Go."  My first of many run in's with the police I'm sure!!!
And hopefully the first of many adventures with my boys!!!! 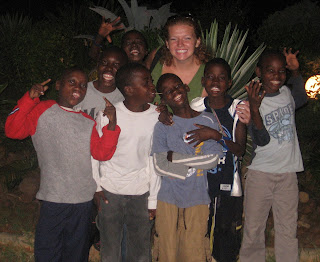 Me and my boys - Felis, Anecete, Paulo, Iva Nelson, Inacio, Frantza, and Augustino
Posted by Sarah Olds at 9:58 PM 3 comments:

I'm so sorry it's been so long since i've updates on the sickness with the babies!  They are doing much much much better!!! The sickness that was going around among the littlest babies has ended.   Neimias, who was in the hospital with doctors thinking he wouldn't survive, is back at the center!  I saw him today out on the playground sitting with my friend Brooke and I didn't even recognize him from the time I had visited him in the hospital!!!  We truly believe that Neimias is a miracle!!!
We do still have a baby names Tino who is not doing well.  A couple of months ago, we had a bad scare with him and didn't think he would make it.  Amazingly he did but has not really been responsive since then.  He is now back in the hospital and heavily sedated.  We really want to hospital to release him so that he can come back to the center.  Our desire is that, even if he isn't going to live much longer, he would be here at the center surrounded by people who love him.
Thank you all for your prayers and please continue to pray for Tino!
Posted by Sarah Olds at 5:59 PM No comments: