A Different Kind of Thanksgiving 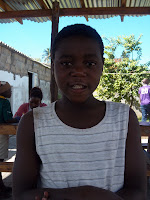 This past Thursday, as families all over the States were gathering to celebrate Thanksgiving, I was thousands of miles from my family. But I had the beautiful privilege of taking a boy who had been living on the streets for a few years back to his family.
Abel is 13 years old. His great grandparents live about an hour from the city as well as one of his brothers. His mother and grandmother live closer to the city but for Abel, his great-grandparents place is home. His great-grandparents were so excited to see him, although at first they didn't recognize him as it had been at least 2 years since they'd seen him. His great grandfather pulled out all of Abel's documents and old school papers as well as some family photos. He spoke to us about the love they have for Abel and how they want him to stay home with them and eventually take over the family farm.
Their joy over their returned great grandson was beautiful.
This was a Thanksgiving I will never forget.
Posted by Sarah Olds at 7:16 PM No comments:

The Mozambican school year has now ended. That means no lessons at Masana for the month of November!! We are seeking creative ways to entertain the boys each day and, living on the coast, the beach is always a hit. So once a week we pile all 30-something boys as well as 6 or 7 adults into our 2 cars and drive to Costa do Sol for a couple of hours.
I love beach days because I see the boys forgetting about the harshness of street life as they play soccer, swim, build houses out of sand and, well, just be kids.

Back in March, while I was in the States begining my cancer treatments, I had the idea of throwing a prodigal son party at Masana on the day that a boy is being reintegrated. In the story of the prodigal son found in Luke 15, the father gives the son 3 gifts and a huge party:
But the father said to his servants, ‘Quick! Bring the best robe and put it on him. Put a ring on his finger and sandals on his feet. Bring the fattened calf and kill it. Let’s have a feast and celebrate. For this son of mine was dead and is alive again; he was lost and is found.’ So they began to celebrate.
Luke 15:22-24
So began the tradition of Prodigal Son Parties at Masana. This past week, I was blessed to be here for Solomão's party. Luis, who is the head of our reintegration team, did a beautiful job of telling the story of the prodigal son and the significance of the 3 gifts - a robe, a ring, and shoes. Each of the gifts symbolize honor, position, and sonship. For Solomão, the shirt, ring, and sandals he received are to remind him of the commitment he is making as he leaves the streets and is reunited with his family.

Please keep Salomão in your prayers as he adjusts to life back at home.
Posted by Sarah Olds at 10:51 PM 2 comments:

This past Monday I taught all of the Masana boys about halloween and the idea of dressing up in costumes and going trick-or-treating. I had some old pictures on my computer from the halloween parties we use to have at our house in Athens so I was able to print off a picture of me dressed as Strawberry Shortcake to show all of the boys. That night, the 6 boys that are living with us right now sneakily put together costumes and trick-or-treated at our house. Thankfully, there was a bag of Reese's cups in the freezer that I was able to give them!!! However, that means we no longer have a surplus of reese's cups in the freezer for those days when we just need a little taste of America....anyone want to send some our way?

note: all donations of resse's cups and any other american goodies can be sent to our p.o. box in south africa:
Sarah Olds
Suite 337 Private Bag X11340
Nelspruit 1200 South Africa
Posted by Sarah Olds at 10:33 PM 1 comment: