Lots of people have been checking in to see how the week went so here is a summary:

I had the MRI Wednesday. It went well and the radiologist says it looks positive. The cancer is centralized to one location. I went in thursday as well to redo the mammogram and ultra sound. I had had these done in South Africa but they were not sufficient. During this testing, they did an ultra sound of my lymph nodes and said that they don't see swelling there which is a good sign. The radiologist also inserted a clip into the tumor to help easily locate the tumor for surgery and/or chemo.

I have an appointment with the medical oncologist Wednesday of next week and then go in for genetic testing on Thursday. Then on the following Tuesday (April 5) I will meet with my doctor (surgical oncologist) again. It still feels so far away but I guess we are getting closer to having a plan for surgery and treatment.

Every time I leave the hospital, I find myself thinking "is this really happening?" It still feels surreal. I miss mozambique and my boys so much but am trying to find contentment in where God has me now. A song by Bethel has become my theme over the past weeks. It is called "One Thing Remains." The words say:

Higher than the mountains that I face
Stronger than the power of the grave
Constant in the trial and the change
One thing... remains

Your love never fails, it never gives up
It never runs out on me

I don't know why I have to walk this road but I know that God is in control. I have no need to fear. I can trust in His love. It never fails. It never gives up. It never runs out on me.
Posted by Sarah Olds at 11:24 PM 3 comments:

Just a quick post to let you know that I have an MRI on Wednesday at 9:00am. This will be to see if the cancer has spread anywhere else in my body. Once the results are in, I'll have an appointment with a medical oncologist and then I'll meet with my doctor (a surgical oncologist) again next Tuesday.

Finally feels like things are moving. Keep praying!
Posted by Sarah Olds at 3:54 PM No comments:

My first days back in Georgia were a bit emotional. I went to Emory Hospital in Atlanta on Tuesday where I had an appointment with Dr. Rizzo who had been referred to me by a friend's father. The first news I received was that my insurance would not be accepted because my insurance company is outside of the USA. I cried. Here I was having gone back and forth with my insurance company for days trying to get approval to return to the States for treatment to be faced with the news that my insurance was no good. I would have to pay all expenses out of pocket and wait for them to be reimbursed. That's fine when we're talking one or two appointments but when we're talking surgeries and MRI's and radiation, not at all possible.

I went ahead and paid out of pocket for the appointment and saw the doctor. I really like her. She was very kind and broke everything down into simple terms. After discussing the financial situation with her, she stepped out to speak to her assistant. A few minutes later, her assistant returned and said that Dr. Rizzo had agreed to take me on as a charity case and, as long as all was approved by Emory Hospital, she would provide my treatment for free! Needless to say, i was thrilled with this news.

It took a couple of days to process my paperwork but I got a call this afternoon and I have been approved as a charity case! Tomorrow I hope to connect with Dr. Rizzo's assistant and get my MRI scheduled as well as the other testing she wants to do.

Though I am only a few weeks into this journey through cancer, I am already so aware of God's hand over me. He has already shown Himself so faithful as He has provided me with a flight home, free treatment, trusted friends in the medical field to offer their professional input, and countless friends and family all over the world praying for and encouraging me. I know there will be hard days ahead but I am choosing to trust in God's faithfulness and believe that He will see me through all that lies ahead. And that He will get me back to my boys in Mozambique ASAP!
Posted by Sarah Olds at 12:54 AM 8 comments:

My insurance company has agreed to cover my treatment in the States so I'll be returning Sunday. I arrive in Atlanta Monday morning and have my first doctors appointment at Emory on Tuesday afternoon. Nothing like hitting the ground running....but the sooner I get this whole process going, the sooner I can return to my precious boys in Mozambique!
Posted by Sarah Olds at 10:04 PM 4 comments:

Just as I am transitioning out of Mozambique for a time to deal with my recent diagnosis of breast cancer, here at Masana, our first boy has entered into our one-month transitional housing phase. This is a vision that has been in the development for over a year. In the past, when we have reintegrated street boys back with their families, we've often had to return time and time again to help families deal with basic problems involved with a street child relearning how to function as part of a family. Our vision for this one month is that the boy will live with us and receive in-depth teaching from Luis, one of the Mozambican men on our staff. During this time, Luis will spend solid chunks of time sitting and teaching the boy about family. The boy will live here with us during this time as well, allowing him to readjust to what it's like to be a part of a family. 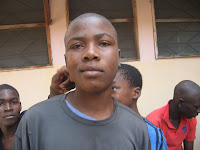 For the next month, he will be a part of our family. Lorenso is 17 years old. He's been a part of Masana since I first started working here in 2009. Last year, he got into some trouble and ended up going to jail for 10 months. I remember being so worried about him last year when he just disappeared. I even made Luis go with me one day to the city jail to see if he was there. He was not so I assumed he had run off to South Africa. But one day a few weeks ago, he just showed up again. He had been released from jail that morning and Masana was the first place he came. On the street, the boys refer to jail as "faculdade" meaning college. It's the place where boys receive some hard life lessons. Lorenso came back from his time in "faculdade" ready to make some changes in his life.

We've already met with Lorenso's family and they are happy to receive him back. His mom was very excited about this time he'll have with us though and the lessons we'd be able to teach him about being a part of family.

So as I prepare to transition out of Masana for a few months, Lorenso will be here preparing for the transition back to his family. Pretty sad that I won't be here to be a part of his time in our family but excited to see him is in a few months time when I'm able to go visit him with his family!
Posted by Sarah Olds at 11:13 AM No comments:

I've been asked how people can give towards my medical care. I raise funds through an organization called Unveiled Faces. You can give online at www.unveiledfaces.co or send a check made payable to Unveiled Faces with "Sarah Olds" on the memo line to:
Unveiled Faces
PO Box 8235
Atlanta GA 31106

Thank you for wanting to bless me as I walk this road ahead.
Posted by Sarah Olds at 4:49 PM 1 comment:

Today I had an appointment with a surgeon in Nelspruit, South Africa. If I continue care on this continent, he would be the one performing my next biopsy. However, my hope is to return to the States for that procedure. The more and more I research and learn about what lies ahead, I know that I want to be in the States where I have an abundance of family and friends around me. After discussing this with the doctor today, he agreed and wrote a report to my insurance company recommending that my further care be provided in America.

Please join me in praying that the insurance company responds quickly and in favor of returning to the States. They will handle booking my flight home. I'm not sure what percentage of my treatment they will cover yet but I have a feeling I'm going to need lots of favor with hospitals when it comes to discussing payment options.

Thank you all so much for the encouraging emails and messages you have sent. I truly believe that the peace I feel is because of all the prayers reaching heaven on my behalf.
Posted by Sarah Olds at 4:55 PM 6 comments:

This is not the easiest blog post to write as no words seem to lessen the harshness of the reality I am facing. So I’ll just say it. I have been diagnosed with breast cancer.

I received the call 1 week ago today from a doctor in South Africa. And suddenly my life here in Mozambique with my beautiful street boys is being put on hold as I deal with this disease. It makes me angry. Not at God because I know that God is for me and will lead me through this time. But it makes me angry at the enemy…that he found some way to take me away from the ministry that I love so dearly. But I am choosing to trust that my God works all things together for good for those who are called according to His purposes and who love Him.

I am still making decisions about if and when to return to the States for treatment. I know that this is the best option but it is so hard to leave my boys. God has surrounded me with an amazing team of people who are working alongside me here so I know the ministry will continue on just fine and street boys will continue to leave the streets and return to their families. I just hate that I’ll have to miss out on it for a time.

Thank you to all of you who have sent encouraging emails in the last week. Please keep praying for me…that the cancer would be completely removed from my body. Believe with me that Jesus is the Healer of all disease!
Posted by Sarah Olds at 4:03 PM 11 comments: