I’m reading 3 different books at once right now – Wide Awake by Erwin McManus, Hope Lives, A Journey of Restoration by Amber Van Schooneveld, and Fields of the Fatherless by Tom Davis . Today, the sections that I read in each one of these books all quoted Matthew 25:31-46 in part or its entirety.

"When the Son of Man comes in his glory, and all the angels with him, he will sit on his throne in heavenly glory. All the nations will be gathered before him, and he will separate the people one from another as a shepherd separates the sheep from the goats. He will put the sheep on his right and the goats on his left.
"Then the King will say to those on his right, 'Come, you who are blessed by my Father; take your inheritance, the kingdom prepared for you since the creation of the world. For I was hungry and you gave me something to eat, I was thirsty and you gave me something to drink, I was a stranger and you invited me in, I needed clothes and you clothed me, I was sick and you looked after me, I was in prison and you came to visit me.'

"The King will reply, 'I tell you the truth, whatever you did for one of the least of these brothers of mine, you did for me.'

"They also will answer, 'Lord, when did we see you hungry or thirsty or a stranger or needing clothes or sick or in prison, and did not help you?' "He will reply, 'I tell you the truth, whatever you did not do for one of the least of these, you did not do for me.' "Then they will go away to eternal punishment, but the righteous to eternal life."


God created you and I to express His goodness. “Every time you perform a loving act; every time you alleviate human suffering or bring hope and joy into a person’s life, you’ve expanded the good and increased the honor God receives for creating you in his image. God loves when his children reflect his character. (Wide Awake)

I’m a missionary in Africa. . . yet I’m challenged by this passage of scripture. How many times do I miss an opportunity to express God’s goodness to the people so close to His heart – the fatherless. Look at these statistics I read in Fields of the Fatherless:
•Today there are over 143 million orphans in the world. That’s one child in every 13!
•More than 13 million orphans were added to the total in 2006 alone, many due to HIV/AIDS.
•Every 5 seconds a child dies because he or she is hungry.
•10.9 million children under the age of 5 die in developing countries every year – malnutrition and hunger related accounting for 60% of these deaths.
•More than 1 million children are trafficked every year as sex slaves and another 8.4million children work under horrific circumstances – forced into debt bondage or other forms of slavery, prostitution, pornography, armed conflict, or other illicit activities.
•By the end of 2006, there were 2.3 million children living with HIV around the world, and over half a million children became newly infected with HIV in 2006.

These statistics break my heart. They overwhelm me. They challenge me. How many times have I passed by a hungry child begging for food without offering him something to eat? How many times have I seen a child living on the street and dressed in rags yet not given him clothes? 143 million orphans in the world. How many of them live in Maputo, Mozambique? How many of them do I pass by everyday?

Gregg Hampton, at the Vine UMC, put this video together about my ministry.

A Week of Car Problems 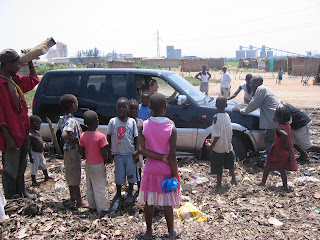 What a week this has been!  Last Tuesday, Brooke and I went to Matola to visit Zaccarius one last time.  It had been raining a lot the week before and it was quite muddy.  Zaccarius' house is pretty difficult to get to.  At one point we have to drive through a garbage pile.  We got stuck in it because of the mud.  As if that wasn't bad enough, the battery on my car decided to quit working at that time too.
The people from the community all came out to help push the car out of the mud.  They ended up getting shovels and digging it out!!!  By the time we actually got the car out, there were at least 12 people pushing with a huge crowd of children watching and cheering them on.
Then we had to deal with the dead battery.  Since there aren't an abundance of cars passing by in the middle of the village, you can't just flag someone down to jump you off.  Instead, we paid a guy with a bike to go get a battery and bring it to us.  They put the new battery in my car, got it going, took the new battery out, and put my battery back in.  On the way home, I stopped at a garage and bought a new battery.
Two days later (let me add that this was Thanksgiving and I was meant to be at home preparing our feast), I was leaving Shoprite and my car wouldn't start.  I walked over to the garage next to the grocery store to ask for help.  I even called my friend Vovote to make sure I knew what to say in Portuguese when asking for help!  The mechanic was very kind and came over to look at my car.  He said that it was definitely the battery (let's not forget that I just bought this battery 2 days ago).  Thankfully, the director of the center, Steve, was nearby so he came to jump my car off.  But that didn't work.  2 young guys who were at Shoprite came up to help us.  They ended up taking the battery out of Steve's car, putting it in mine, starting my car, then returning my battery.  They also informed me that the battery the mechanic put in my car was to small!
So back to the garage I went and got the right size battery.  The mechanic didn't argue as he quickly realized he had put the wrong one in.  So you'd hope that was in the end of my problems.  Not so.
Sunday, it was 110 degrees out so me and a couple of other missionaries went to the pool.  As we left to return home, my car wouldn't start.  So once again, I borrowed someone else's battery, put it in my car, started my car, then put my battery back in.  (I can do this myself now as I've watched it so many times this week!).  The car started just fine with the other person's battery so I'm thinking I just need to return the battery, get my money back, and buy one from another garage.  But I'm barely on the main road when the electrical system in my car goes out.  I coast to the bottom of the hill and pull over into a bus stop.
A couple of guys from the center came and towed me back.  Now in Mozambique, we don't have tow trucks. . . you just pull the broken down car behind one that works.  This was quite an adventure as my car's breaks were not working either so we had to use the emergency break anytime we felt like we were getting to close to the car pulling us.  We made it back to the center and got some of the boys to push my car into my car park.  The key is stuck in the ignition and the windows are down. . . and it's looking like rain.  We tried the ole' swap the battery trick but it didn't work this time.  So I covered my car with a tarp, cried a little because I'm a girl and I'm frustrated with car problems in a country where you can't just call AAA.
Now I'm sitting here writing this as I wait for the mechanic to arrive . . . he's already over 2 hours late.  T.I.M. (This Is Mozambique)!
UPDATE:  Problem solved. Alternator repaired.  And it only cost me 1600 mets (thats about $65).
Posted by Sarah Olds at 8:41 AM No comments: