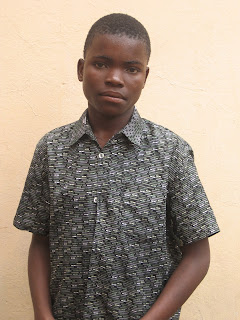 We are currently trying to help Castigo get back home. He is 15 years old. His family lives about 3 hours from Maputo. His father has passed away but his mom and 2 siblings are at home. He came to the city in February to look for work. He was unable to find any and since he knew no one was forced to live on the street. Praise the Lord for bringing Castigo to Masana so that we can help him get back home!!!

This past Friday, we took 2 other boys back home. Castigo went with us so that we could visit his family on the way back to Maputo. We spent 3 hours driving around and were not able to find his house. When he came to the city in search of work, it was his first time ever really leaving home. It was dark when he left home and he does not remember how to get back. We drove around until dusk then began the 2 hour drive back to Maputo. Unfortunately, that means Castigo is still living on the street. In a couple of weeks, we'll take him back and try again to find his home.

Please pray for wisdom as we try to figure out how to find Castigo's family.
Posted by Sarah Olds at 3:05 PM 1 comment:

Another Trip to Xai Xai 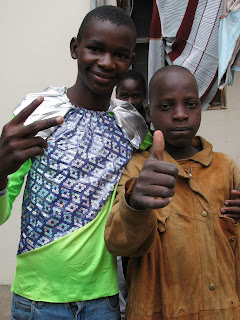 Last Friday, we took Antonio and Leonel back to their homes in Xai Xai, a city about 3 hours away from Maputo. Leonel is living with his mom. We spoke to the director of the school near his house and arranged for him to register there this week. Normally, we would have done all of that ourselves but because it is so far away, we've left it to Leonel and his mom. Leonel was so happy to go home. He was all smiles the entire day!!!

The circumstances with Antonio's family have changed a bit since our visit in March. At the time his older brother, Luis, was living with their mom. Their mom has since kicked Luis and his wife out. They were able to rent a house and have happily takin in Antonio. Actually, I think this is a much better situation for Antonio as he and his mother do not get along and I was worried he was not going to make it long in her house. Antonio has now moved in with his brother. We bought him a small cooler and some canned drinks that he will begin selling on the beach.

Please keep Leonel and Antonio in your prayers as they adjust to life back at home. It is hard for them to go from the freedom on the street to the responsibilities of work, school, and family life. Pray that they know the blessing that their families are!!!
Posted by Sarah Olds at 2:36 PM No comments:

Last year, the Lord blessed me with a wonderful friend, Brooke. We spent the year together working at the Iris Ministries children's center just outside of Maputo, Mozambique. She is such an important part of my time there and I can't imagine how it would have been with out her!!! One of the greatest treasures I share with Brooke is the family of 2 boys that were living on the street in Maputo, Zacarius and Gaspar. If you follow my blog, you've seen many posts about this family. Looking back, it's amazing to see how much that family has impacted where I am today! Thank you, Brooke, for joining me in that adventure. . . I don't know that I'd be where I am today had you not!!!

I had the pleasure of spending the last 2 weeks with Brooke as she returned to Mozambique to get married! We had a wonderful time together and I am so thankful for the gift of her friendship. The wedding was so beautiful. Now Brooke and her new husband, Valdemar, have returned to New Zealand to begin their life together. Selfishly, I hope the Lord brings them back to Mozambique very soon!!!

Here is a picture of Brooke and I with Zacarius and Gaspar's family: 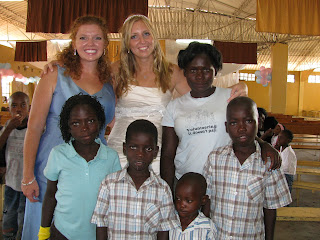 We did another home visit today for Emilton. We met with his mom and uncle, Justino. It was a long meeting with lots of talking in circles but the mom finally agreed to allow Emilton to live with Justino!!! Praise the Lord!!! She even gave us Emilton's official documents so that we can register him for school!

Next week, we will go to the school Emilton last attended and get his documents to register him in a new school near his grandfather's house. We'll buy Emilton new clothes, some blankets, and school supplies and then take him to his uncle's house in Thursday!!!

We had a hard time finding Emilton this morning to go on the home visit. Luis, my co-worker, was out in the city at 6:00 this morning looking for him. Emilton had not slept in his usual spot last night. By 9:30 we still hadn't found him so we decided to go ahead and go to his mom's house to speak to her and the uncle. As we were heading out of the city on the public bus I saw Emilton so we jumped off, got him, and jumped back on. He was hesitant to come with us because someone had stolen his flip flops the night before. Sounds like such a silly thing but for some reason shoes are very important to these boys. They will walk the streets barefoot all day but when it comes time to visit home, they have to have shoes on their feet. It reminds me of a study I did recently on the prodigal son. One of the gifts the father gave the son upon his return was a pair of shoes. Shoes speak so much of one's position in the family. Only a servant would be barefoot. I guess the same still applies today in Africa . . . a son wants to be seen as a son.

Thank you for your prayers for Emilton. I'll continue to keep you updated!

UPDATE: Emilton is now living at his uncle's house and has begun school! Praise the Lord that another precious boy is off the street!!!
Posted by Sarah Olds at 3:46 PM 3 comments: