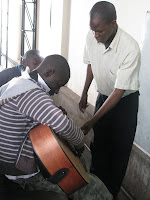 Thank you to Chick Music in Athens, GA for donating this guitar to Masana!!! The boys are enjoying learning how to play. We have to keep reminding them that there is only one guitar and that they will have to take turns. They are all so eager to learn a few chords. And our worship times each day are much more fun with the guitar. The workers at the project are enjoying it as much as the boys!
I bought a strap and a couple of pics at a music store here a couple of days ago. Who knew that pics would cost $2 each in Mozambique?!?! If anyone would like to send us some guitar supplies (tuner, pics, strings, etc) we would put them to good use. My address is:
Sarah Olds
Suite 337 Private Bag X11340
Nelspruit 1200
South Africa
Posted by Sarah Olds at 5:02 PM No comments:

This Is Mozambique (T.I.M.)

This week I have been reminded of just how different life is here in Mozambique. 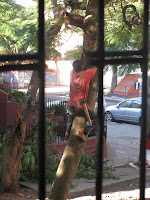 today some workers cut all the branches on the tress outside of my apartment building. hopefully it will take care of our mosquito problem! it was quite entertaining to watch as the men shimmied up the trees barefoot and chopped the branches with a hatchet. no buckets to lift them up or ropes holding them in case they fell or other "normal" safety measures taken. they didn't even block off the road to pedestrians so i just watched them running as branches fell. i was planning on taking my car to work today so that i could get the dent (see next story) looked at but my garage was completely blocked by the tree branches. T.I.M.
yesterday, i parked my car outside of the church i work at in the city. the church is on the bottom few floors of a tall apartment building. as i was walking back from my portuguese lesson, the church guard called my over to look at my car. there was a large dent and white marks above the front wheel. he then began to pick up pieces of this "rock" that had fallen out of the window of an apartment above. the "rock" was actually sea coral and was knocked out of the window by a gust of wind. we eventually found the man who lived in the apartment with the falling coral. he takes no responsibility. . . says he rents the apartment and the sea coral belongs to the landlord so it's her fault. T.I.M.
after the falling coral incident, i went to matola, a city about 20 minutes outside of maputo. there was a bad accident on the road. I eventually just turned off my car and sat for 45 minutes doing portuguese homework. they finally opened up one lane of traffic. there was an 18 wheeler carrying bags of cement involved in the accident so they were cleaning up all of the spilled cement. it took me 2 hours to get somewhere that should have taken 20 minutes. when i headed back to the city a couple of hours later, they were still cleaning up the accident!! the rush hour traffic was backed up for miles every chapa (public bus) stop was packed with 50 to 150 people waiting to get a chapa home. the woman who works in our house said she didn't get home until 9:00 last night and she left our house before 4:00! T.I.M.
this is normal life in mozambique. and i do love it!!!
addition to TIM: i took one of the boys, naldo, to the doctor today. he got stabbed last week and had to get 8 stitches. we were supposed to get them removed today. at the local health center, they told us to come back tomorrow because they didn't have any of the supplies they needed to see patients today. T.I.M.
Posted by Sarah Olds at 4:30 PM No comments:

Police Search And A Knife Wound

The first boys to arrive at the project this morning were Abrantis, Ernesto, Naldo, and Mario. Right away, Abrantis and Naldo gave me some money to hold for them in my pocket. I am always leery of guarding their money because usually its earned by stealing lights from cars and selling them on the black market. But I took the money and was quickly distracted by Abrantis, who we jokingly refer to as "Malouco" which means crazy person. He gave me some folded up newspaper and told me to open it. As I did, whatever was inside of it started to move so i screamed and threw it at him as all the boys laughed at me. It was some contraption they had made with paperclips, a rubber band, and the tab off a can of coke.
Their joke was interrupted by an undercover police officer entering the project and asking to search all of the boys. He had followed them from the black market where he had watched them selling stolen lights. He asked that we gather all of the boys. Two of them quickly went to the wash basin where I heard the clanging of metal. I went and peeked inside the basin and saw that they had discarded the "keys" that they use to steal lights from cars which is actually a flat piece of metal.
The police officer searched 8 or 9 of the boys. He found 2 lights in Mario's pocket. Surprisingly, the police officer was not there to punish the boys though. He is working in the black market to try and arrest the adults who use the street boys to steal things for them. So Pastor Paulo, our director, Mario, and 2 other boys accompanied the police officer to the black market to point out the people they sold stolen lights to. It's so encouraging to see the police targeting the adults who benefit from the kids stealing. If we see the day when the black market no longer exists, then maybe the kids will no longer steal.
The rest of the day continued as normal.....we went to play soccer, had our church service, and ate lunch all together. A group of 10 or so of the boys walked me home so that they could get a soccer ball from my house. I gave them the ball and off they went to play at a court here in the city. An hour later, my doorbell rang. It was Naldo, Mario, and Jito. Naldo had a piece of scrap paper stuck just above his eye and it was soaked in blood. He had gotten into a fight with one of the other boys, Luis, while playing soccer and Luis cut him with one of the "keys" they use to steal lights.
Thankfully, I live right across the street from central hospital. So i grabbed a washcloth to replace the bloody scrap of paper and off we went to the emergency room. After accounting the story of what happened to the worker at the front desk, a police officer, the doctor, and 2 nurses, we left the hospital with 8 stitches. And it took less than 2 hours which is pretty fast for an ER in any country!!!
An eventful day to say the least. I love the boys I work with and I so desperately want to see transformation in their lives. We talk to them so much about stealing and fighting. They are such huge problems to tackle and I know that it is only God that can cause the change in their hearts. If they could only grasp His love for them and learn to love other people with this same love.
Posted by Sarah Olds at 4:36 PM 4 comments: 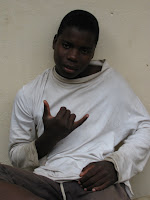 Today Albano "Biggs" left the streets of Maputo and returned to Beira where his family lives. Biggs is 17 years old. He was living on the streets for the past 6 months. He originally came to Maputo to live with his uncle and work. However, his uncle got into some trouble with the police, sold all of Biggs' things and fled to South Africa.
Sadly, this is a common story. Many young men come to the city in hopes of finding work and making money. It's not so easy though and they often end up living on the streets.
I will miss Biggs. He is such a sweet young man. He would come to my house once a week and wash my car for me. Even this past Monday, he was walking down my street when I returned from South Africa and stopped to help me carry my things up to my apartment. I know that he needs to be back at home with his father but I hate to see him go. It's the bitter sweet part of my job.
Please join me in praying for Biggs. Pray that his transition back to life with his family will go well. He'll be living with his father and stepmother. Pray also that he'll find a church to go to in his community where he can continue to learn about the Father. Biggs is very smart and has completed grade 8 so far. He's excited to return to school when the new term begins in January so pray also that everything gets sorted out for him to return to school.
Last night before, Biggs stopped by my house one last time to say goodbye. Our last words to each other were "até nunca." Normally you would say goodbye with "até logo" which means "see you later" but for Biggs its "até nunca" . . . "see you never." And that is my prayer for Biggs...that he will prosper at home with his family and never again return to the streets of Maputo.
Posted by Sarah Olds at 2:40 PM 1 comment:

These were the chickens that became lunch on Children's Day.
The pictures speak for themselves! 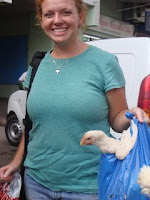 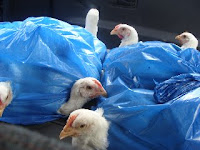 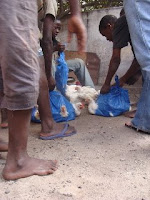 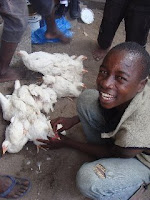 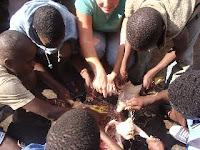 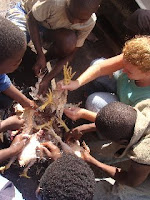 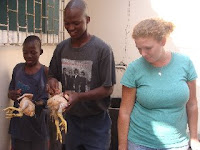 They were yummy chickens!!!
Posted by Sarah Olds at 8:37 PM 1 comment: