Last week I had the bitter sweet privilege of taking my sweet Chico home. Chico is 11 years old and has been around Masana for a couple of years. His life on the streets started out a little different. Chico is from a community near the city. He and his friends would come to the city during the day to beg and then return home at night. Eventually they started spending the odd night on the street and then go home the next day. As they became accustom to the freedom of life on the streets, they started going home less and less. Eventually they found themselves living on the streets. With each passing day, it became harder and harder to return home.
Until last week.
After about a month of talking with Chico about going home the day finally arrived. I half expected him to change his mind and not show up that day. But he arrived at Masana bright and early ready to say his goodbyes and go home. He directed us on how to get to his family's home. Upon our arrival, his mom hug him and his little brother, who was playing at a neighbors, came running too. We sat under a tree with his mom, 2 aunts, and an older, respected neighbor from the community. 8 or more kids gathered around to watch and listen in on our conversation. Chico's mom explained that Chico had never done anything wrong at home but had simply disappeared. She was so grateful to have him back.
I already miss my daily hugs from Chico and having him around to hang out after Masana each day. I know I'm not suppose to have favorites but Chico is one of my favorites.
Please keep him in your prayers as he readjusts to life at home.
Pray against the temptation to return to the streets.
Pray for new friends in his community who are not interested in that lifestyle either. 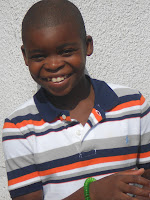 Posted by Sarah Olds at 8:29 AM No comments:

Isaac. He will laugh. This is the biblical meaning of the name given to the firstborn son of Abraham and Sarah.
Here at Masana, God blessed us with an Issac and, true to his name, he brought much joy and laughter to our home. Isaac grew up on the streets. At the age of 14, he decided it was time to go home. In October of last year, Isaac moved in with us as we began the process of reintegrating him with his family. During this time, we saw him transformed into a young man who knew how to be serious when necessary but also delighted in bringing laughter to those around him.
We succeeded in finding Isaac's grandparents in a community near the city but, unfortunately it did not work for him to live there. His grandparents helped us find his other grandmother, his mom's mom. Isaac desperately wanted to reconnect with his mom and live with her. It had been at least 5 years since he had seen her. After many attempts at contacting the grandmother who could lead us to Isaac's mother, we finally met her. 2 weeks ago, she accompanied us on the hour and a half drive from the city to show us where Isaac's mother now lives.
Today, Isaac is living with his mother and younger brother.
Please keep Isaac in your prayers as he adjusts to this new life. Pray for him to make new friends. Pray for him to be comfortable enough being himself so that he may continue bringing laughter to all he meets.

Posted by Sarah Olds at 4:32 PM No comments: