C-Section . . . a Blessing in Disguise

Two weeks ago today, I was in the hospital awaiting the birth of my little Melina.  After hours of contractions, we went to the hospital at 5:00 am.  Contractions were coming every 4 to 6 minutes but I had only dilated 2 cm.  The doctor decided to break my water to bring on labor faster.  Over the next 4 hours, the doctor monitored my labor that seemed to be lessening rather than progressing.  At noon, I had only dilated to 3 cm and contractions were slowing down rather than increasing.  So my doctor made the decision to proceed with a cesarean.  From there, everything happened super fast....an operation room was vacant, I was given papers to sign as I was being pushed down the hall, different doctors were introduced to me, my epidural was topped off, Roberto appeared all dressed in scrubs to sit by my side, the surgery began and minutes later we heard the beautiful sound of our baby girl crying. It was a beautiful moment that will forever be etched in my memory.

Roberto then had to leave the operating room with the nurse who would be taking care of our precious Melina.  And I found myself all alone.  Yes, there were doctors and nurses all around doing their jobs...but I was all alone.  And then my doctor peeked over the curtain to tell me that he had found a lump on one of my ovaries and was a bit concerned so he had called another doctor to come have a look.  And I felt so alone.  That is not the kind of news anyone wants to hear but especially not someone who had already been through a battle with breast cancer.  As much as I prayed in that moment, my mind automatically went to the worse and the tears started flowing.  It felt like an eternity as we waited for the second doctor to arrive.  He came in and was introduced to me as I fought back tears not wanting to show how scared I was.  The two doctors discussed what they were seeing but I was not able to hear.  I was later told that the second doctor felt it was best to close up and wait a few months as it is very likely the lump had been aggravated by my pregnancy and would shrink some.  My doctor said that he doesn't think the lump is cancerous based on how it appeared but that further testing will be needed in about 6 months.

Roberto and I quickly realized that my labor failing to progress and the doctor recommending that we proceed with a C-section was actually a blessing in disguise.  Otherwise, we would not have known about this lump.  And now we pray and wait for the doctor to continue with further testing.  Please join us. 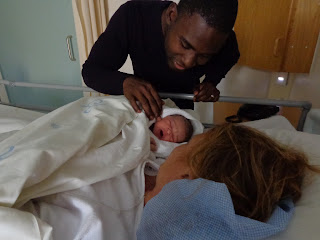